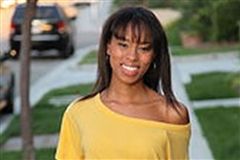 UCLA, Class of 2018.
Neima is a senior at UCLA, majoring in World Arts and Cultures/Dance with a minor in Film & TV. At UCLA, she was the former Programming Director for SANAA (Social Awareness Network for Activism through Art) which fosters conscious advocates through fusing art and activism. They have on-campus programming and host art activist workshops with students at Manual Arts High School in South Central. In that space, she helped put on poetry jams, Vagina Monologues, and two concerts featuring artists such as Skye Townsend, Rudy Francisco, and Dwele. She has moved on to be Director of Hip Hop Congress, a series in USAC’s Cultural Affairs Commission at UCLA, where she previously served as co-chair for the fashion show and had been a member for two years.Within her major, she choreographed and produced a dance film entitled 'Sister Soldiers,' which premiered for WACsmash'D 2014, the only student-produced show for Dance Majors. The film seeks to provide an intimate look into the relationships between black women, revealing the stereotypes they face and combat on an individual level but interpret and understand as a collective. The film recently won an ASPIRE award for Media for Social Change.To begin her career in media and filmmaking, she and Genesis Ahtty co-founded and launched Underground Youth, a website and movement that promotes socially conscious artists through film shorts and photography. They work to increase the representation of under-represented groups in the entertainment industry.
Back