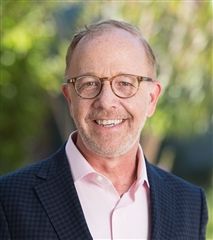 Head of School at Crossroads School
Bob Riddle has served as the head of school of Crossroads School for Arts & Sciences since 2009. He first joined the school in 1984 as a Middle School math and life skills teacher and went on to serve in roles including Upper School academic dean, Upper School director and assistant headmaster and dean of faculty. Prior to joining Crossroads, Riddle was a math teacher at Haverford Jr. High School in Havertown, Pennsylvania, from 1980 to 1981 and a math teacher at Bedford Jr. High School in Westport, Connecticut, from 1981 to 1983. He earned a bachelor of arts degree in psychology and bachelor of science degree in secondary education (mathematics) from the Pennsylvania State University in 1980. In 1993 he was one of only 12 independent school educators nationwide to receive the prestigious Klingenstein Fellowship from Columbia University Teachers College, where he received a Master of Arts degree in educational administration in 1994.
Back