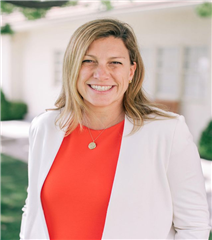 Head of School for The John Thomas Dye School
Rose Helm is the Head of School at The John Thomas Dye School (JTD), a K-6 school serving 336 students in Los Angeles, CA. Rose is in her third year as Head of School at JTD, where she was also a fifth grade English teacher from 2003-05. Before coming back to JTD, Rose was at The Hamlin School, a girls’ K-8 school in San Francisco, for 11 years. At Hamlin, Rose served as the Middle School Division Head for five years and taught middle school English teacher for six years.

Earlier in her career, she taught at her alma mater Harbor Day School, a K-8 independent school in Corona del Mar, CA; coached volleyball at her high school in Laguna Beach; and also worked for several years at marketing and public relations firms in San Francisco. Rose holds an M.A. in English Literature from UC Irvine and a B.A. in Art History from Princeton University. At Princeton, Rose was the captain of the volleyball team, president of her sorority, and an illustrator for the school newspaper.

Rose, along with her husband and fourth-grade daughter, enjoys traveling, making trips to the public library, attending county fairs, and wrangling their French Bulldog, Alpha.
Back